Check out my Northwestern wide receivers preview for WNUR Sports.

With Siemian expected to start this year, the ‘Cats should to pass the ball more than in years’ previous, leading to a heavier reliance on their wide receivers than in years past.

The Wildcats returns four of their top six pass catchers from last year in Seniors Tony Jones, Christian Jones, Kyle Prater and Junior Cameron Dickerson. In total, the ‘Cats return about 70 percent of their receiving production from 2013, only 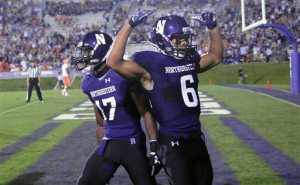